About the Royal House of Bourbon - Two Sicilies 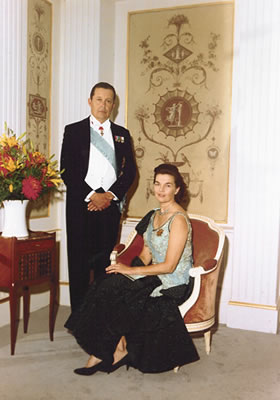 Their Royal Highnesses the Duke and Duchess of Calabria
Since the end of the Two Sicilies Monarchy in 1860 the head of the Bourbon-Two Sicilies royal house has lived in exile. The last reigning King, Francis II, and his brother and successor (in 1894) Alfonso, Count of Caserta, continued to maintain their claim to be the legitimate successors to the throne of the Two Sicilies and refused to recognize the unification of Italy.

With the succession in 1934 of Ferdinand-Pius, Duke of Calabria (1869-1960), the active claim to the Two Sicilies was abandoned and soon afterwards the Duke of Calabria traveled to Italy and met with the Italian King, on the occasion of the marriage of his daughter Princess Lucia to the Duke of Ancona, a member of the Italian royal family. The process of reconciliation between the Bourbon and Savoy royal houses has continued although the Head of the Royal House of the Two Sicilies continues to represent the traditions of that ancient Monarchy.

The present Head of the Royal House continues to affirm his deep affection for the Kingdom of his ancestors, and his 3rd daughter, Princess Ines, in 2001 married into an ancient Neapolitan noble family, further cementing his links with southern Italy.